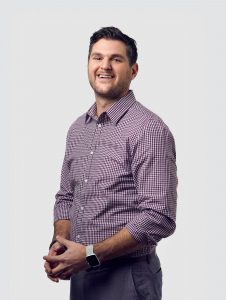 One of my least favorite things to do is the self-introduction, but here goes.

Hello, I’m Frank. I’m the Associate Creative Director at The Martin Group, a fully integrated communications agency in Buffalo, New York. I work mainly on the copywriting side now, although my experience has been all over the board, including video production (my first love), digital design, front-end development and acting (I’ll get to that later.) I also enjoyed a short tenure as secretary of the AAF Buffalo’s Board of Directors.

If you really want to know what I’m like in person, take a look at my past video series, Casual Fridays. It was a web series I wrote, directed and starred in. Each season was starkly different by design. Beginning with videos highlighting marketing topics and cheap jokes and ending with a four-part mockumentary series centered around famous ad campaigns. Think Documentary Now! meets AdWeek. And yet, the highlight of the series may have been delivering me the opportunity to speak about the benefits of branded entertainment in advertising at the business video conference, WistiaFest.

Over the last decade and change in advertising, my work has earned dozens of industry awards and allowed me to explore every creative outlet imaginable—including building a irreverent t-shirt company and writing a half-dozen TV pilots including a Shore Scripts TV Pilot Quarter Finalist.

Questions? Visit my LinkedIn and hopefully I’ll know the answer.