Why The Best Branding Is Being Yourself

Why The Best Branding Is Being Yourself

It’s a funny thing when you achieve your goals — you actually have to live up to them.

This past summer, I wrote, filmed and starred in a weekly video series to help promote our ad agency. It was harder than I thought to make people laugh without making a joke out of myself.

This project started a while ago. Our agency has been going through an incredible transition and this past March, I was promoted to creative director — the role I’ve dreamt of since I first walked through our doors.

I love attention, it’s no secret. I’ve known that my entire life. That’s why this is the perfect role for me. And part of this role is, as my boss put it, “becoming the face of the agency.” So after very little prodding, I agreed to create, Casual Fridays, a series of videos to help humanize our agency. This meant attaching my face to our name — which is Quinlan, by the way. We’re a 25-person shop in Buffalo, New York. Keep an eye on us.

There were two distinct emotions fueling me as we started filming. One was the obvious excitement about doing something new, fun and creative; the other was a sheer, unadulterated terror.

The scariest audience isn’t strangers
For years I thought being professional meant playing it safe — quiet, steady, never standing out. As I’m beginning a very pivotal point in my career, I’ve flung myself, full force, into destroying that image. These videos are the real me. They’re funny, self-deprecating, and informed. They’re not for everybody — which I’m fine with.

The real fear stems from the 25 other people whose business cards say Quinlan on them, too. It’s an amazing feeling to have people who’ve put five, 10, even 20 or more years into a career trust me to change outside perceptions of their company. But I also realize it’s an amazing responsibility.

Embracing leadership and the fear of the unknown
We didn’t decide to start this project on a whim. It’s part of a larger, grander mission. We’re moving from the small agency no one’s heard of to becoming the agency that everyone wants to work with.

We’re not there yet. Step by step, we are making strides in that direction. It all started internally and at the top.

For years, we were held back by the fear of risk. The creative in our agency got stale. Our work didn’t evolve and the effects of this were clear: some of our clients treated our work as a commodity. Our employees felt disengaged and frustrated. If we didn’t change things, we would fail to attract new business and top talent.

But our leadership — to their credit — realized this. We aligned with the right people and got them into the right positions. A new culture gave us pride in our work that didn’t exist before. It’s amazing to see the passion, and sometimes anger, in people fighting for new ideas.

We are taking risks. And yes, we are making mistakes.

But the process of getting to a fresh idea that fails is far preferable to allowing the uninspired to see the light of day.

Trust your vision (and a few confidants)
There is a careful balance between collaboration and personal instincts in good creative. For Casual Fridays, it was important to sometimes ignore those same people that support me. Taking input from too many sources would’ve watered down this entire project.

There will always be imperfections, outside suggestions and a million ways to do something. Pick one and let it fly. I’ve worked closely with a few people to polish each script and finalize each video. Trust the people whose opinion you respect, but most of all trust yourself.

You gotta love it
Nearly all 12 episodes were written, shot and edited outside of my regular 9-to-5. I used weekends and late nights to polish each episode. I enjoyed every second of it — having an understanding wife helps, too. 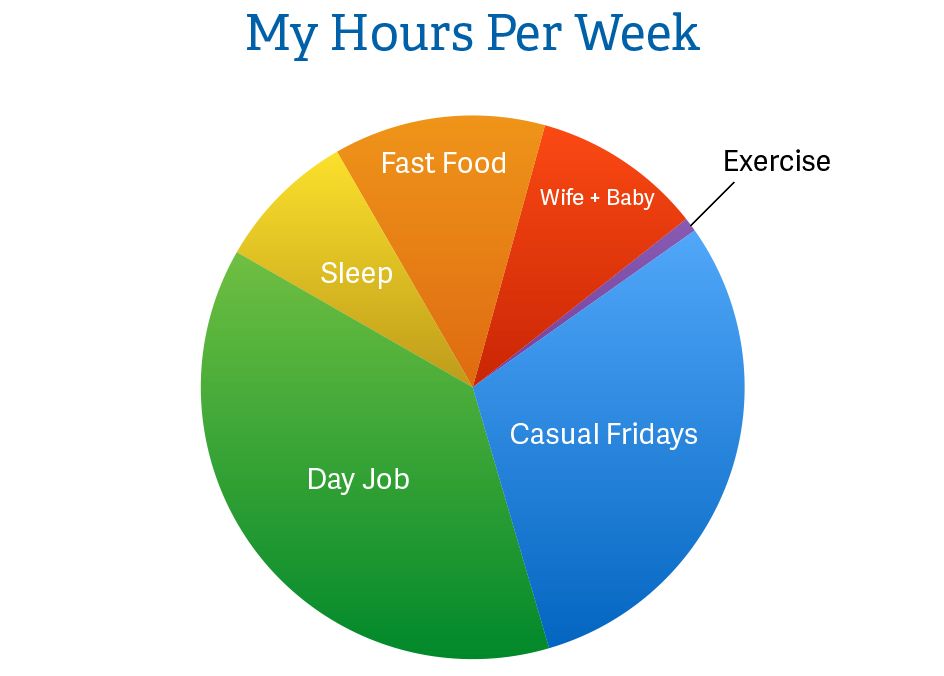 A typical weekly breakdown during season one.

It’s amazing, this adrenaline rush I get. Seeing this nugget of an idea grow into something tangible — even if it is a joke about jorts. 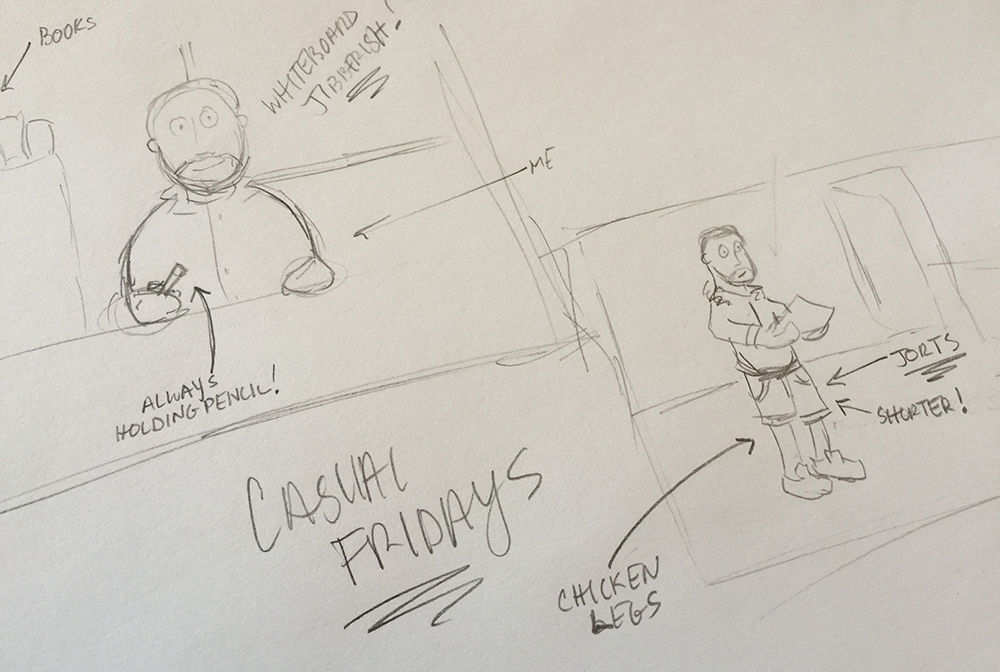 Full disclosure: I just drew this for the article.

If there wasn’t passion behind this project, the lack of effort would shine through. It would become a part of my everyday to-do list and get lost among the emails to answer and meetings to sit through.

The passion paid off. We didn’t lose momentum and people started watching. And some of those people came back and watched more. We began to build an audience. We nearly tripled traffic to our site and built an email list of people who actually gave a shit about what we were sending. Crazy, right?

It was easy to dedicate three months of my life to this project. I’m building a brand for company, my co-workers and myself. I don’t own it, but I feel like it’s part of me. Why? Because even though it’s a job, I look around and I see a group of people I like spending eight hours a day with. I can honestly say, I’m proud of the work we’re doing.

We’re just getting started
This experiment isn’t over yet. We’re already planning Season Two, which will be bigger and better thanks to all the things we learned:

Whether this video project is a success or a failure, there’s one result that will be unavoidable: we’re showing the world who we are. We hope to attract clients and talent that will know exactly what to expect. They’ll have a built-in trust that will allow us to have the freedom to take creative risks. We’ll trust that we can be ourselves. Together, we’ll create a partnership and not a business deal.

At times it felt like the three minutes waiting for a finished episode to upload was the only time I could truly stop worrying about this project. Casual Fridays was a daunting creative challenge that took our entire agency to pull off.