Mike Cuzzacrea, The Pancake Man, has appeared on “The Tonight Show” with Jay Leno, flipped pancakes with Muhammad Ali, worked a trade show with Regis Philbin, has run with the Olympic Torch and has been the subject of many television and newspaper stories throughout the country. His friendly, outgoing, quick wit and pancake-flipping skills have made him a media star everywhere he goes.

Besides his unique style of running races, he’s raised over $71,000 for charitable groups including Roswell Park Cancer Institute, March of Dimes, the United Way and  the Multiple Sclerosis Society. In addition to raising money, he’s made numerous appearances at charity events and schools. For over 10 years Mike has sponsored the Anita Hughes Memorial Scholarship Fund donated to an upcoming graduate of Newfane High School – totaling over $7,000. 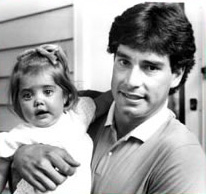 To understand why he runs while flipping pancakes, we have to go back to the beginning. In 1986, Mike Cuzzacrea read a story in the newspaper about a little baby named Melissa, who needed a liver transplant operation. As one can imagine, it was a very expensive procedure and the baby’s family needed money for th procedure. Mike figured that he could help them raise money by organizing some kind of charity event. Despite never running any long distances, he organized “50 Miles for Melissa.” The 50-mile route was in the shape of the letter “M” in honor of Melissa. In the middle of the night, through a hard driving wind, rain, thunder and lightning Cuzzacrea completed the run, thus raising $7,000 for the family.

While sifting through the world record book, he spotted the record for marathon running while simultaneously flipping a pancake. The record for the 26 mile, 385 yard race was 3 hours, 6 minutes and 48 seconds. Thus began the career of the soon to be famous Pancake Man. Taking on the role of a scientist, The Pancake Man had to figure out how to accomplish this feat.

Experimenting with pancakes right off the grill failed due to them being fragile. Eventually, The Pancake Man figured out that if he microwaved two pancakes and held them together with Saran Wrap and contact glue he had a flapjack that could survive the 26+ mile run. This also fulfilled the requirement that the pancakes had to weigh at least two ounces to be considered for a world record. 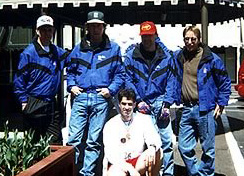 A second component in breaking the record is that his frying pan to had to weigh at least one and a half pounds. The Pancake Man uses a regular frying pan, with a metal washer affixed to the bottom side of the pan. In 1987, The Pancake Man ran his first pancake-flipping marathon in Erie, Pennsylvania. And after only five attempts, in May of 1990, he broke the world record by 26 seconds. Most importantly, The Pancake Man would raise money for charity with each race he ran. 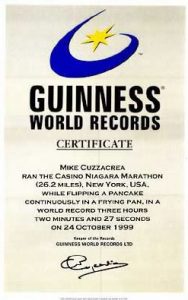 He eventually broke the record again, 17 marathons later on October 24, 1999 with a time of 3:02:27 at Niagara Falls, Ontario. Over the years, The Pancake Man started to gather a lot of attention from the media, race fans along the course and sponsors. During most of his races, the attention isn’t always given to the winners, but to that crazy guy who flips pancakes for the entire race. He appeared on “The Tonight Show” with Jay Leno, worked with Muhammad Ali at a fun-run for children in Los Angeles and he’s met and worked with many other celebrities along the way.

In 2008, Mike focused on breaking a second pancake-related record. This time around, he set his sights on the “highest pancake flip.” Following a succesfull first attempt at 24 feet, Mike’s record was quickly broken by a rival flipper. In 2010 at the Walden Galleria Mall in Buffalo, New York, Mike again broke the record with a monumental flip of 31 feet, one inch. He still holds both the fastest pancake marathon and highest pancake flip records to this day.

There was a hundred percent chance of a terror attack that week and I was running in the New York City marathon. I was scared.

To get to the start of the race you had to go through security check points. When the bus went by ground zero, you could hear a pin drop and runners were teary eyed. Then finally to Staten Island, where you could sense a special bond between the runners. This race was different. It meant a lot more.

Mayor Giuliani’s speech gave me goose bumps. He said that he was proud of us for being brave and not letting terrorists keep us home. 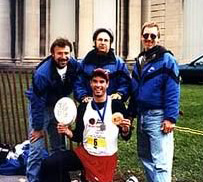 Then the gun went off. As I crossed the Varrazona narrow bridge, I could see the statue of Liberty as I was flipping my pancake, and it was beautiful. The spectators knew that I was coming. My frying pan was painted with the Statue of Liberty and my pancake had an American flag on it. Running through all five boroughs was like running around the world. Coming through Central Park I did some of my 30 ft. high flips and some behind the back trick flips. The crowd was loud and you could always tell there was a firefighter or police officer by the cheers.

At the finish I was hurting. I told myself that it was worth it and I could accept this being my last marathon. The medal they put around me was priceless. Then I took the subway back down Manhattan and limped into a local pub. Everyone greeted me like a hero and I ordered a Guinness and watched football on TV

I said to myself, “This is like one big family and I don’t even know anybody.”

That’s what America is all about – coming together.